Two explosions go off from afar. Suddenly the thousands of people that surround you begin a nervous panic. You are locked in an alleyway with only one way out. Depending on where you start, you have between 10 seconds to a minute and a half before 6 raging bulls (and 6 steer) either blow past you or through you. They run 2 to 3 times faster than you can run so you cannot outrun them. If the bull gores you (spears you with his horn), it is about as hard to pierce your body as it would be for a Honda Civic with a knife attached to the front. Of course I am talking about the event in Pamplona called the “Running of the Bulls” (aka the encierro). It is easily the dumbest thing that I have voluntarily done this year with regard to my safety. Unlike other adrenaline rushes and adventure sports, the main danger in this event does not come from weather conditions or your own judgment. The danger comes from two variables much harder to control, a stampede of bulls and a stampede of people. For these reasons and because of the sheer numbers, I cannot recommend anyone actually do this. BUT if you do, it is one of the most invigorating moments you will have and here are my recommendations on how to survive. And how not to be this guy. 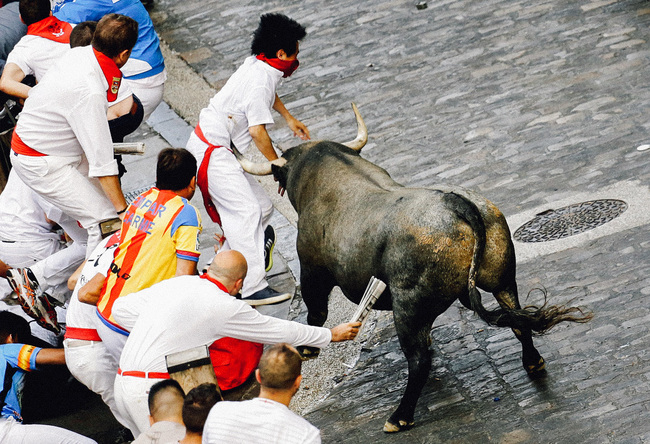 What is the Running of the Bulls? #

Firstly, the bull run takes place every year for an entire week between July 7th to July 14th. There is a bull run each morning at 8am sharp (you have to line up by 6:30am). The brave (or stupid) few that decide to run, lock themselves in a 875 meter course which has been used since the foundation of the run. The run evolved out the necessity to get the bulls from their pen to the bullring. Every year locals began to run with the bulls for fun and after the city made several failed attempts at stopping the run, they finally made an event out of it. It has now becomes a world wide spectacle with over 1 million people in attendance each year to watch. The entire city comes alive with everyone from toddlers to the elderly dressed in all white with red accessories.

How dangerous is it? #

1) Corralillos - Two fireworks signify that the bulls are released from their corral (1) at 8am sharp. They typically run to the bullring (8) within 2-3 minutes. However, if a bull get turned around or finds someone distracting, it can take up to 10 minutes to reach the end.

2-3) Calle de Santo Domingo / Plaza del Ayuntamiento – This is where the craziness begins. The run starts up an incline and a curve. The bulls run between 2 to 3 times faster than you on a full sprint so you cannot outrun them, especially on an incline. 4 people have died here. On the day I ran, 5 people were gored at point (3).

4) Curva de Mercaderes hacia Estafeta - This is a 90 degree turn where most the bulls cannot slow down fast enough and typically hit the wall. Most people are not stupid enough to meet the bulls on the outside of this turn. Surprisingly, only 1 person has died here.

5) Calle Estafeta - This is the main stretch of the course. It is straight and maybe a 5 degree incline. It is wider than other parts of the course and is largely agreed to be the safest area. 1 person has died here.

6-7) Curva de Telefonica / Callejon - This is the final turn in the course. It is extremely dangerous because it becomes more narrow, turns, and begins a decline. Everyday people trip over each other and cause pile ups here. Not only can you get hit by a bull because you are stuck, but you can get trampled by the crowd in their panic. 3 people have died here.

8) Plaza de Toros (Bullring) - The bulls run into the ring one at a time. The team of dobladores (people with professional bullfighting knowledge) attempt to herd the bulls into corrals as quickly as possible. But this does not always happen according to plan. 6 people have died here. After all the bulls are in their corrals, a third firework goes off and the doors to the bullring close. Runners that did not run fast enough are locked outside while the runners who made it in get to stand in the bullring and bask in some glory of sorts. It is the closest I have come to feeling like a gladiator. After the bulls are removed from the ring, the organizers bring out baby bulls one at a time for the runners to “play” with. To me they looked almost identical to the adult bulls with the exception being that their horns were covered to make them less deadly.

How to get gored and/or hurt #

I have watched about five San Fermins bull runs on Youtube which is enough to have a general sense of the dangerous parts but no where near expert level knowledge. If you want to get gored, do the following:

The least risky way to run the course is to start at point (7), run into the ring (30 meters) immediately when the fireworks go off, and as soon as you are in, jump the wall. You are much more at risk of your ego being bruised from the mockery than from a bull goring you.

The safe-ish way to run is to do what we did (although it did not go as planned). We started at point (5). I had watched videos online of the run and knew it should have taken the bulls roughly 60 seconds to hit Curva de Mercaderes. And from there it takes the bulls another 60 seconds to get into the bullring. Our plan was to start with a light walk and begin to run about 45 seconds in. Ideally making it into the ring before the bulls made it in. What actually happened was that after the first firework, complete panic ensued. I completely lost track of time and before I knew it I heard a crashing noise as if a car had run into the wall. The bulls had already hit Curva de Mercaderes (4). 15 seconds later, I heard cowbells. The cowbells are tied to all the bulls necks so naturally I began to panic. Luckily, I followed some best practices and stayed away from danger. All the bulls ended up running past us before we made it to (6) but we followed closely behind and were able to make it into the ring before the doors closed.

I know that this write up is incomplete so if you are seriously considering the run please do more research. Watch 5-10 videos on Youtube of the run, look at the official site (http://www.bullrunpamplona.com/), and look up other tips online. Everyone tends to get caught up in the moment. They take their safety that second for granted. It is not until the bull is up against them that you see the complete terror on their face. Please be safe! Good luck! 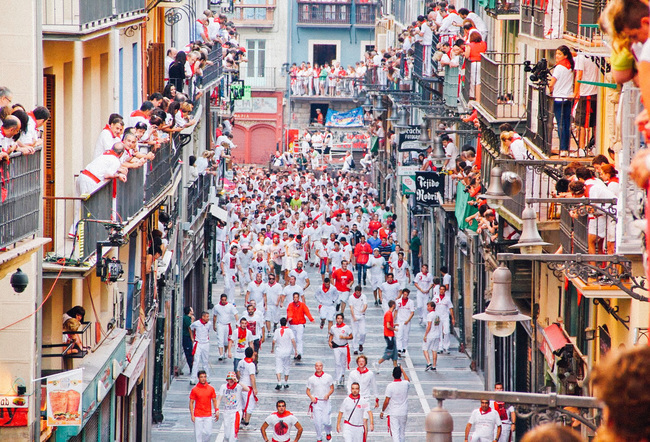 I’ve felt restrained lately through no fault by my own. The feeling is that I’m not getting to create and build as much as I’d like. This is coming off the coding bootcamp I took last year where the world was literally my oyster. I felt... Continue →