I’d liken the YC Interview to half boxing match, half investor pitch. My friend Shao and I began the YC journey only 2 months ago when he emailed me asking if I wanted to apply. Having a lot of respect for him as a developer I agreed to grab some pho with him over lunch at Turtle Tower. He showed me a project he was working on that spun up a VM in the browser and spawned interfaces (cloud IDE/terminal) in separate browser windows. I was skeptical for a second but quickly saw value in it if it could all be in one window and could be spun up in one button click. We filled out the application, filmed a video together at Hack Reactor, got the app reviewed by a couple friends and then we sent it in. No expectations. To our surprise, a couple weeks later we got the generic email inviting us for an interview two weeks later on Monday, April 28 2014. We were off to the races!

There were many obstacles in our way. One, I wasn’t going to be around that first week because I had been planning a trip to Coachella for the past year with some of my closest friends. Bad timing, but I decided to go on the trip. That gave us a little over one week to prepare. Also, our entire plan was weak. Shao and I had lots of experience in starting companies, product management, management consulting and developing but we saw gaping holes in our story. There was no business model to speak of, the market size was unclear, we didn’t have much of any secret sauce, we hadn’t been working on it that long and the list goes on. Determined, we piled through and began to schedule mock interviews with everyone we knew that had gone through YC or interviewed.

Over the next five days we threw together a business model, reached out to founders at some of the top enterprise YC companies that were our potential customers, polished our pitch and made flashcards with every potential question they could fire at us.

Then the day came for us to interview. Having a strong hatred for the Caltrain, I decided to take YC up on the reimbursement for travel and we booked a hotel that was a 20 minute walk to YC. No need to stress out more than we already were. We woke up at 7am, went for a run, hit some weights at the gym, ate some bacons & eggs at the Hilton and headed over. We were a bit early so Shao and I decided to hang out for a bit and I blasted to Zedd - Lost at Sea to pump myself up for the bout to come. I felt great. I also came to the realization that I really like weekends like those. Ones where you spend it non-stop preparing for a competition or presentation. You sweat over a project as the crescendo builds up and you give it everything you have as the weekend comes to an end. Back to the matter, we walked into YC for our interview at 10am and were greeted by Jessica Livingston in the flesh. She was engaging and genuine just like I had anticipated. We walked into a small room about 15x15 and shook hands with Jessica, Paul Buchheit (founder of Gmail, Adsense, Adwords), Trever Blackwell and Michael Seibel. “So you’re building some automation for Github?” asked Paul. Time to put our gloves up and start boxing. “Our goal is to save developers time. We’re doing that by allowing them to launch any codebase in the browser in 10 seconds,” I replied. Unfortunately for us the intro I gave was poorly guided and we spent the first 5 minutes trying to get them to even understand what we were doing. Shao and I could both tell that the interview was going horribly. We had already burned 5 minutes of the 10 and hadn’t even conveyed what we were building. “Here we’ll show you a demo,” Shao offered. “No, we want you to tell us what you’re building,” Paul fired back with a very skeptical look. The interview only picked up when Paul asked, “Who needs to use this?” I answered back with “We’ve gotten interest from the founders of Parse, Firebase, Mongo, Stripe and Mixpanel. And we have a we have a pilot scheduled with Mixpanel in 4 weeks to help them with their API on-boarding flow.” Their ears perked up for the first time. After that the battle was uphill but at least they were interested. The 10 minute alarm went off and Jessica said we could keep talking. A couple minutes later they actually asked to see the demo and we showed it off. A minute later Jessica walked to the corner of the room to open the door and put her head down, “thanks,” she said. We walked out feeling completely defeated and ready to throw in the towel. Shao and I were in shock that we burned so much time because we knew that every minute you waste in a YC interview is a minute that you don’t get to sell them on your idea. I was laying on the bench in the main room and gave Shao a high five because we were happy we at least put in a solid effort. We were told to wait because sometimes the partners want to ask follow-up questions. A few minutes go by and I see Paul come out of the room looking for someone. He goes around the whole room and doesn’t seem to find who he’s looking for. He walked over the receptionist, whispers something to her and Shao and I perk our heads up to look. We lock eyes with Paul and he walks over to us. We’re completely in shock that he wants to talk. “Have you guys already quit your jobs,” he asks. “No, but we would for YC,” “So I can’t call Hipmunk?,” “Well I’d like to talk to Steve first”, “Ok” we exchanged. Steve is the founder of Hipmunk (my boss), Reddit and also partner at YC. Excited but unsure I gave Steve a call and told him that Paul might be calling him and when I got back Shao said we had a re-interview scheduled for 4pm. Definitely not bad news!

Over the next six hours we kept chatting with other people interviewing at YC. To our surprise most every developer we talked to wanted our product. They all saw the value in it because every dev has wasted tens of hours trying out code or setting up environments. It’s a giant pain in the ass. YC was running late so we weren’t called into the room until after 5pm. We walked into the room with Garry Tan, Justin Kan, Kat Manalac and John. This interview went far better than the previous one. We got our message across about what we were building within minutes. Got them to ask for a demo about 5 minutes through. And generally weren’t up against the wall the whole time. We walked out feeling tired but satisfied that we had given it everything. We began the drive up to San Francisco to hang out at our friends workplace, Keychain Logistics. About an hour later, we got a fairly detailed email from Jessica saying that we did not get in. Our YC journey had come to an end. It honestly didn’t feel that bad. I could tell from Shao’s face he was really hurting but maybe I had just prepared ahead of time and not gotten my hopes up. We had done remarkably well (at least by my measure) because of the seven groups I know that interviewed, one got in and everyone else got straight out rejections, not a second interview. The email read:

I’m sorry to say we decided not to fund you guys. It was a hard decision because we enjoyed talking to you and we were impressed by your demo.

Although the idea of quickly building and running containers for github projects seems like it could be popular, we weren’t convinced that it would make a great stand-alone business. If any of Github, Docker, or Digital Ocean decided to add a similar feature, they could take away your business pretty quickly.

Depending on your goals, it might still be a good idea to keep working on HowToX, with the plan of getting acquired by one of those companies in a year or two. If you decide to work on a different project with more long-term business potential, we’d be happy to hear from the two of you in the next interview cycle.

How to prepare for a YC Interview

YC is a very special kind of interview. It’s a pitch to investors where they aren’t afraid to cut you off as you speak. On a high level, this is what I think they look for:

Thank you to everyone that helped us prepare and otherwise supported us. It was a very unexpected journey and a roller coaster much more.

Thanks Bryan / PatrickJS and the Keychain Logistics team for letting us use your space! We’ll replenish red bulls and cheez-its that we devoured two fold. Also thanks for all the sound advice, we wouldn’t have gotten all the traction on the enterprise side without you.

Thanks Kevin / Joyce for the mock. We took to heart all the advice.

Thanks Michael. You gave us a great perspective on the urgency, attitude and traction that had to come across.

Thanks Ruan and Rohan for the extra prep and breakfast.

Thanks Jimmy for sharing your YC interview story as well. We made sure to show up at the right place!

Thanks to the fitbookr.com team. That was an awesome prep session on Sunday.

Thanks to Shao. The entire journey wouldn’t have happened without you. Great work buddy. It’s rare to find people that work as hard as you do.

For now I want to let the dust settle. There is still a huge opportunity with what we’re building. Every dev that we talked to at YC wanted our product, NOW. They were literally giving us their emails asking for us to send them information. Also, the go-to-market is extremely solid. I know that Shao and I could easily scale up a team to do a land grab of popular Github repos similar to Travis-CI. We will see where it goes. 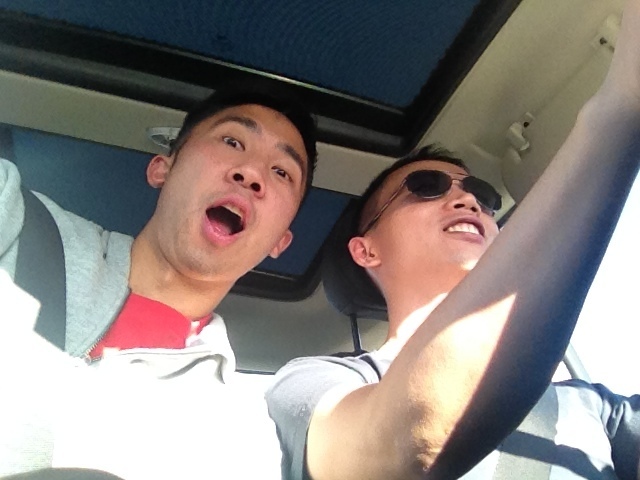 Our drive home before finding out =)

Hey friends, As some of you know, I’ve been dreaming of a trip for the past six years. I haven’t had a strong idea of what I wanted to do on the trip besides that I wanted an extended trip around the world for an indefinite amount of... Continue →